We'll start off with my current ride, the rad power radrunner. This is the bike that I ride to work on a daily basis. This bike has 500 watts of electric assistance from the geared hub-motor. It reaches a top speed of approximately 32km/h. As a daily commuter bike, the RadRunner is perfect. The 3" fat tires give it a comfortable and smooth ride. I especially like the amount of storage space on the bike. I've got a milk crate attached to the front rack which is perfect for carrying any cargo I have. There is also a storage compartment in the middle of the bike for more cargo. Inside the middle stoage I keep a spare tire tube, tire patch stickers, a small tool kit, bungee cords and my bike lock and cable. I've gotten two flat tires while out on the road, and having those supplies meant I was only delayed in my trip by a few minutes. 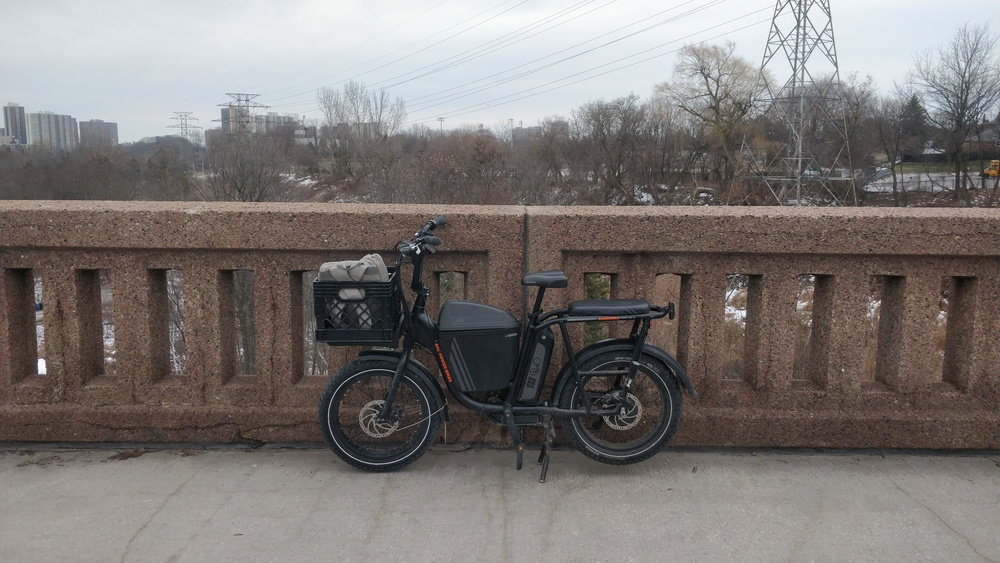 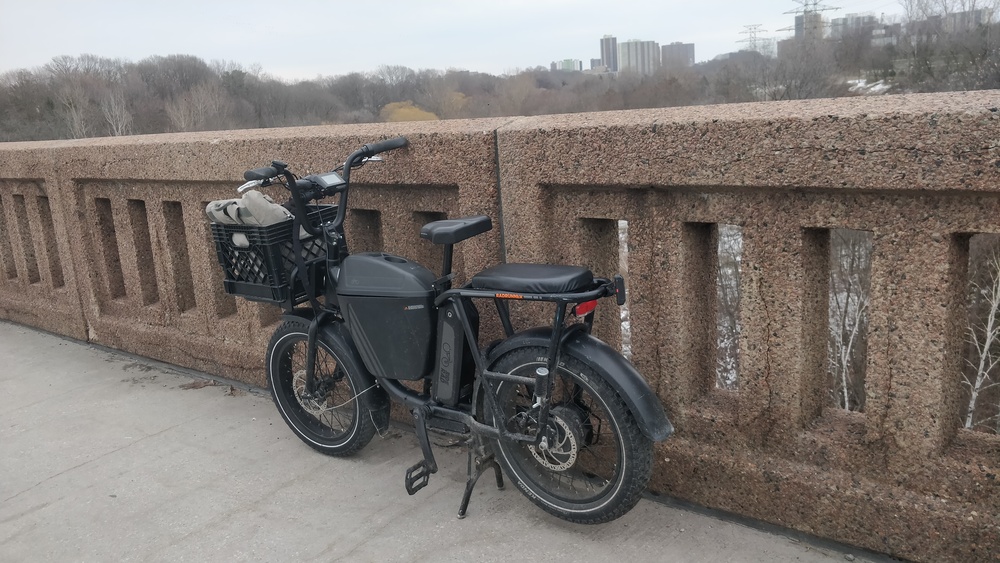 I found this bike abandoned by the curb last summer. I knew this bike was cool and had tonnes of potential right away. It appeared to be a old Dutch-style bike. It has a coaster brake in the rear (pedal backwards to stop) and a 3-speed internal gear hub. I've always been a fan of these kind of bikes because of the fact that they are so utilitarian. Very little of the parts on this bike are likely to fail. The internal geared hub and brake mean that it is protected from rain and other elements because it is nicely enclosed within the hub,as apposed to bikes with casettes that are exposed to the elements. The bike also comes with paint matched steel fenders that do an incredible job in the rain. The upright riding position is also very comfortable even on long rides. To top it all off, it has a very strong rack on the back of it which was perfect for attaching a milk crate to for carrying cargo or my backpack and lunch for work.

When I first got the bike it was in pretty bad condition. Honestly, it kind of looked like junk. It needed new tires, and the chain on that shifts the gears on the internal hub was broken. It also looked like it had been sitting outside underneath a tree for years. It was covered in dirt and pine needles. The inside of the chain guard was completely full of dirt and debris. It looked like the pine needles were there for so long that they had composted into dirt.

The first thing I did was give it a good cleaning to get all the dirt and debris off it. I got some new tires, and fixed the chain to the internal hub gearing with some paper clips. So far the paper clips have been holding up great. I also got a new dynamo generator and lights for it. I was able to re-use the wires that run through the bike inside the frame and simply swap out the generator and lights. Re-using the wires saved a huge headache of having to run wires through the frame and trying to get them to pop out the small hole at the end of the bike. 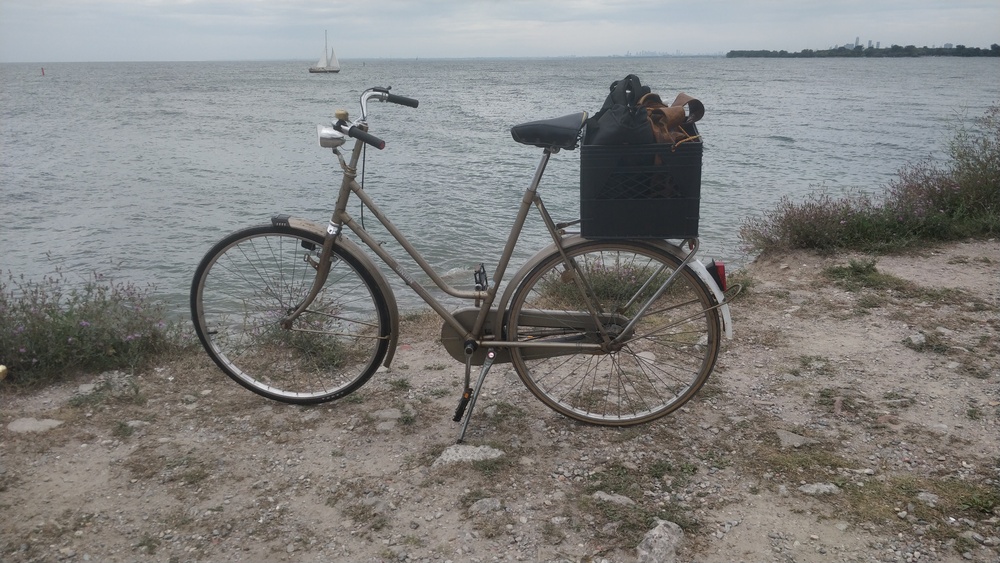 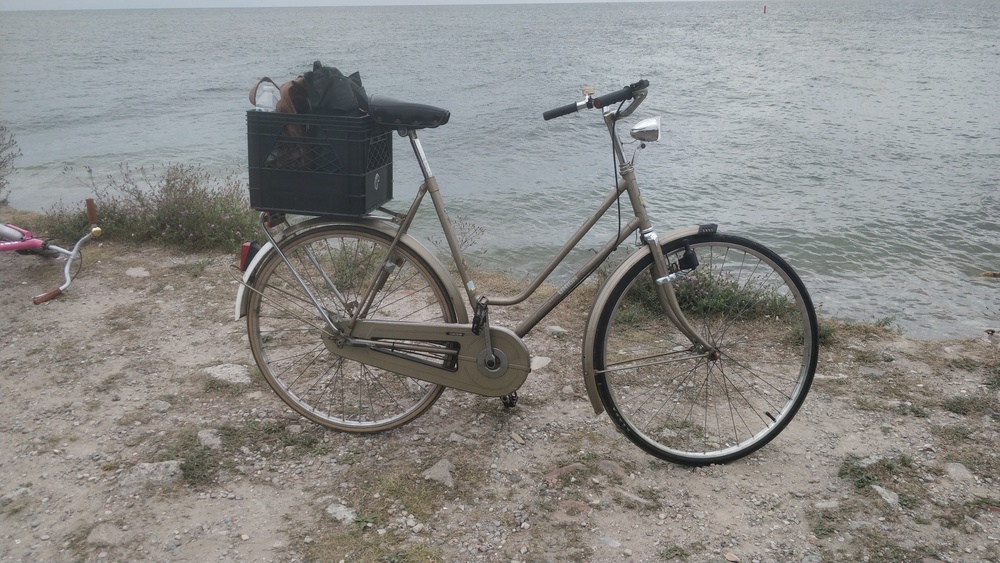 I first acquired this bike off Kijiji. I believe I bought it for around $150. I had always wanted an electric bike, but during this period (back around 2016) most ebikes were scooter style ebikes. Newer bike based E-bikes hadn't hit the market quite yet, and the ones that were available were overpriced for what they offered. For this reason, I decided to buy an electric conversion kit from china, and fitted it to the bike myself. I also got a wald "pizza rack" for the front of this bike. This rack was able to carry tonnes of cargo and is one of my favorite parts of the bike. For the rear rack, I got a little cargo box off amazon to keep the batteries and controller dry.

The kit comes with the hub motor wheel, controller, and throttle. The one I bought was a 1000w motor, and I paid around $450 for it. The battery is the most important piece, I believe. At first I was using lead acid batteries on this bike. They were super heavy and could only travel 10-20km on a charge. After using these batteries for a few months I ordered an 48v lithium ion battery from China, with a capacity of 14ah. This battery worked great and improved the range of the bike tremendously. It also made the bike much lighter. I very much recommend going with lithium ion batteries, eventhough they are more expensive it is worth the investment.

I rode this bike thousands of kilometers commuting to work and back. By the time I was retiring the bike, it had acquired 7000km. Rain or shine, I'd ride that bike to work, even throughout the Canadian winters. When I got my radrunner, I decided to sell this bike. I sold the motor kit to a friend for cheap and also sold the bike on kijiji. Overall this was one of my favorite bikes that i've put together. 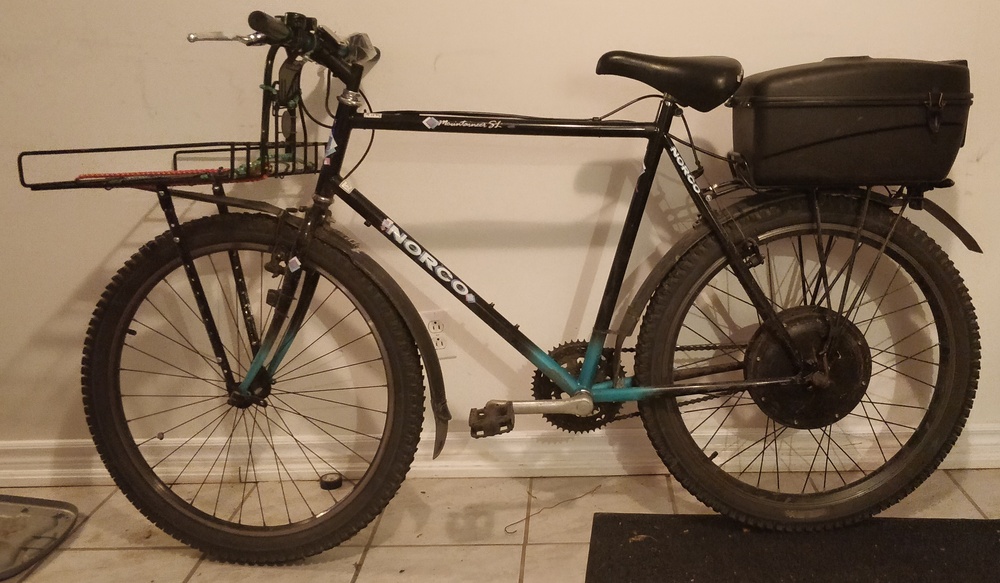 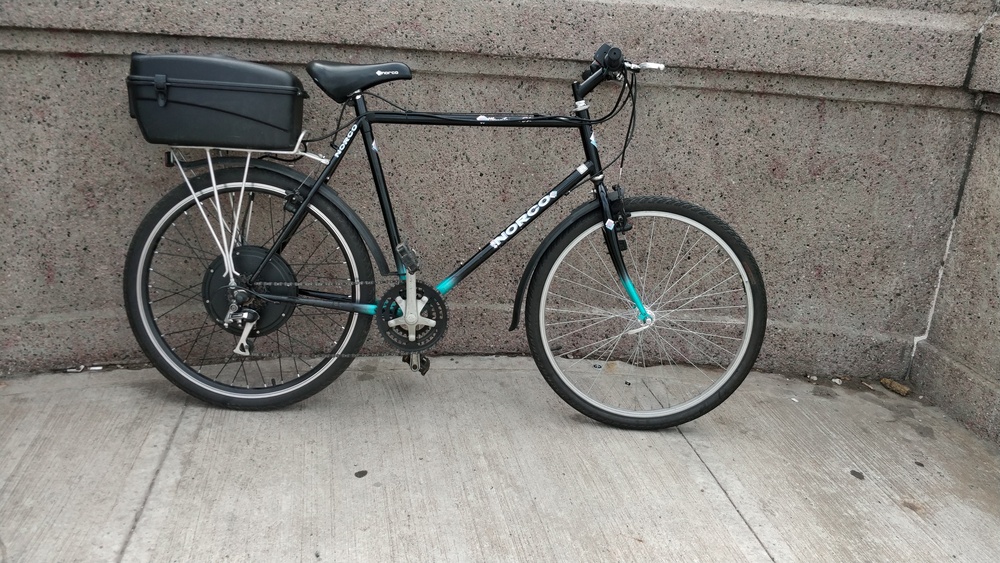 Now let's move on to my first commuter bike. This bike I took with me to university, and used it to get to school for almost a year. Unfortunately, I didn't know much about maintenance at the time and I rode it all throughout winter with zero maintenance. By the spring, the bike was beat. All the components were totally rusted and in bad shape, so I decided to turn it into a fixed gear bicycle.

I found some deep dish fixie wheels on kijiji, and installed them. I rode this bike only only occasionally as I had a new "taller schwinn" for commuting. This bike was intended more for fun than anything else. I did have a lot of fun riding this bike. One day while riding home late with some friends, I ended up crashing the bike into a construction fence and bent the front fork inwards. You can see the bent fork in the first picture. The fork was so bent the the wheel would collide with the pedals if you turn too tight. This was certainly not ideal as it was a fixed gear, so the pedals are going to be moving wether you're turning tightly or not.

I eventually located a new fork for it, and replaced it. I also had the front wheel stolen off this bike when I left it by a U-Haul place near Carlton and Parliament in Toronto overnight. I found a replacement on Kijiji and it was once again on the road. I didn't end up riding the bike all that often. I decided that I wanted to sell it, and converted it to a 7-speed as I thought it would be more valuable that way. I sold this bike for $125 to a guy in Hamilton. 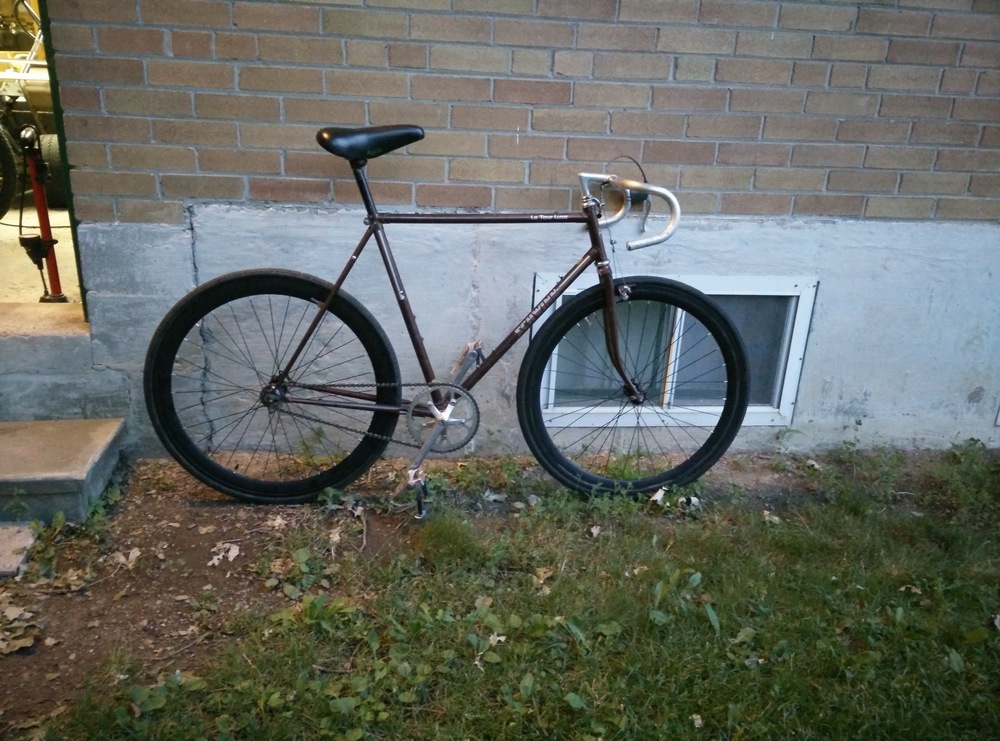 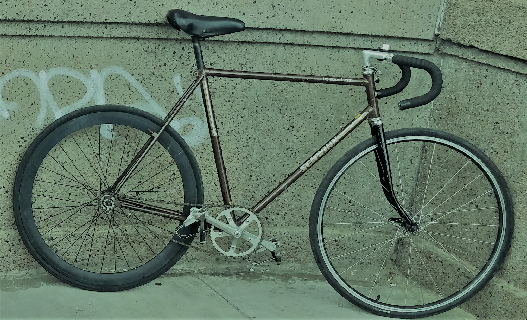 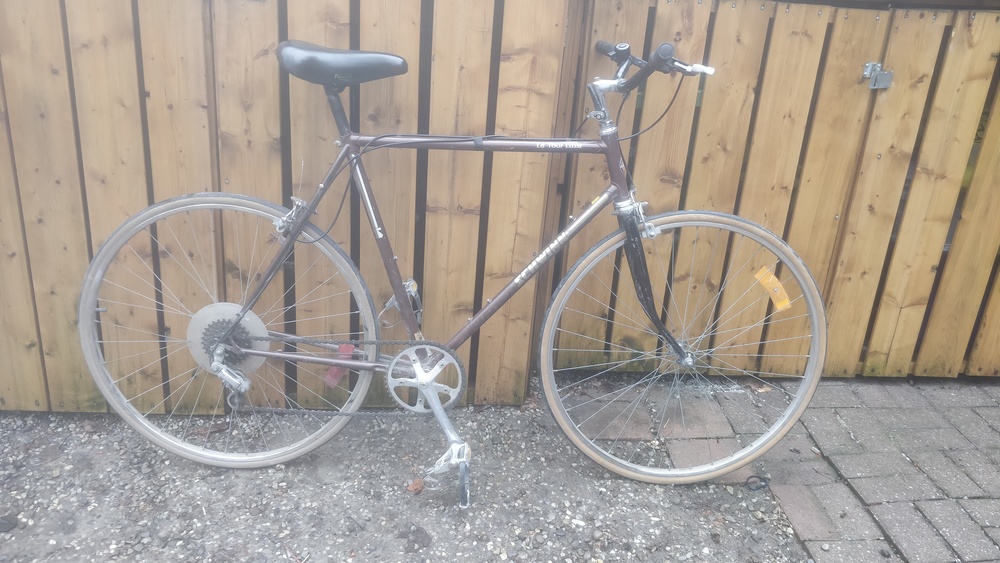 Once my "tour de Luxe" had been destroyed by the years hard riding and salt, I needed a new bike. I found this one on Kijiji, for $200. I bought it, and it was clean and in good condition. It was in Excellent shape when I got it. I rode it as it was for a while, but the wheels started to fall apart (broken spokes). I found some new rims on kijiji, and decided to re-painted it grey. This was a really fun project. I stripped the bike down to the frame, painted it, and re-assembled the bike. I learned a lot about how a bike works from this project and learned tonnes that I would do differently next time. Unfortunately, this bike was stolen from outside of my apartment a few years ago. 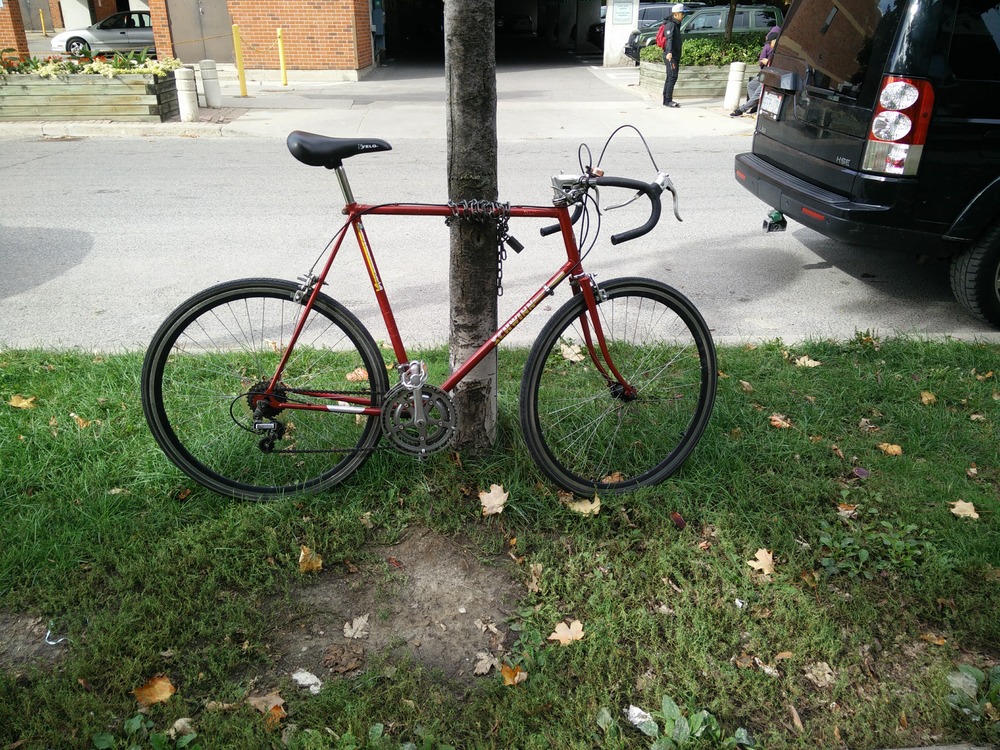 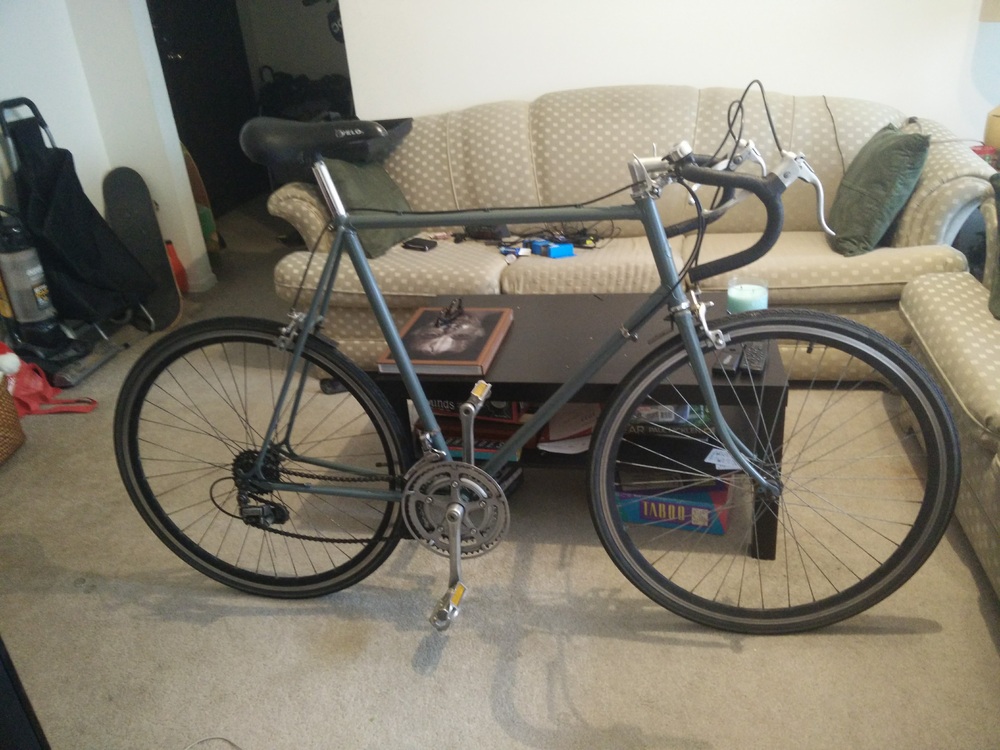 This is an old 5-speed bike made by Sears back in the day. I found it for free outside. I would use it for short trips, or going to band practice. It had a milk crate on the back, where I could keep my trumpet or trombone.

I tried to sell this bike on kijiji, but got no offers. I needed to clear some space in my apartment and decided to abandon the bike outside for someone else to enjoy. 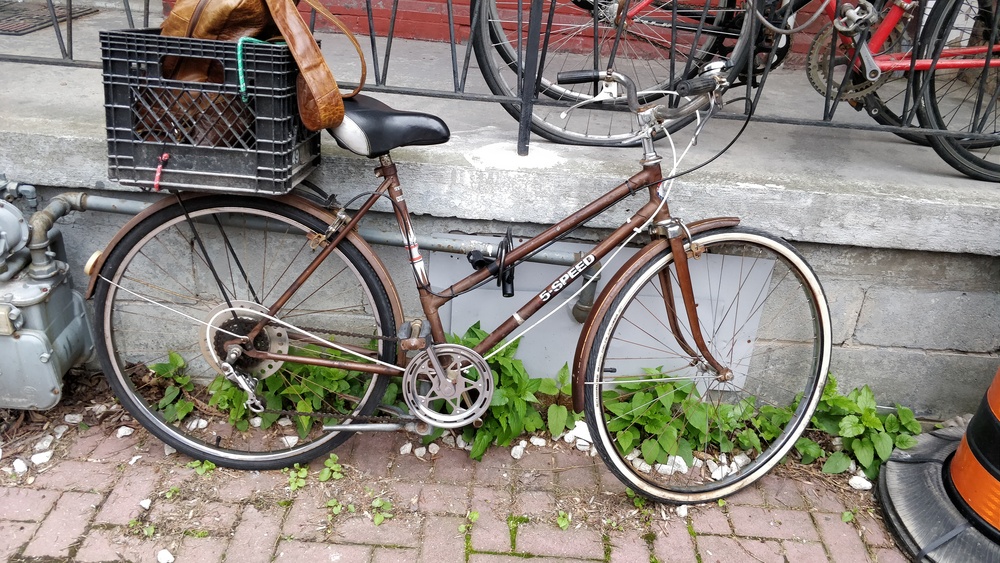 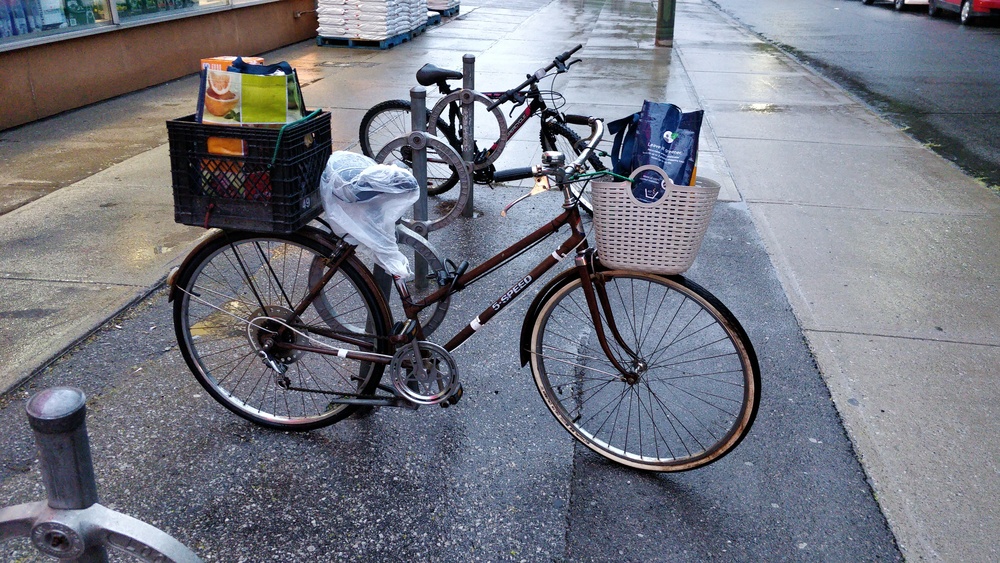 I bought this bike from Canadian Tire for $350. The origional plan was to ride this bike on snowy days to work. Although it was great in the snow I never rode it much, because it is too slow. Way too slow.

I sold this bike earlier this summer for $250. 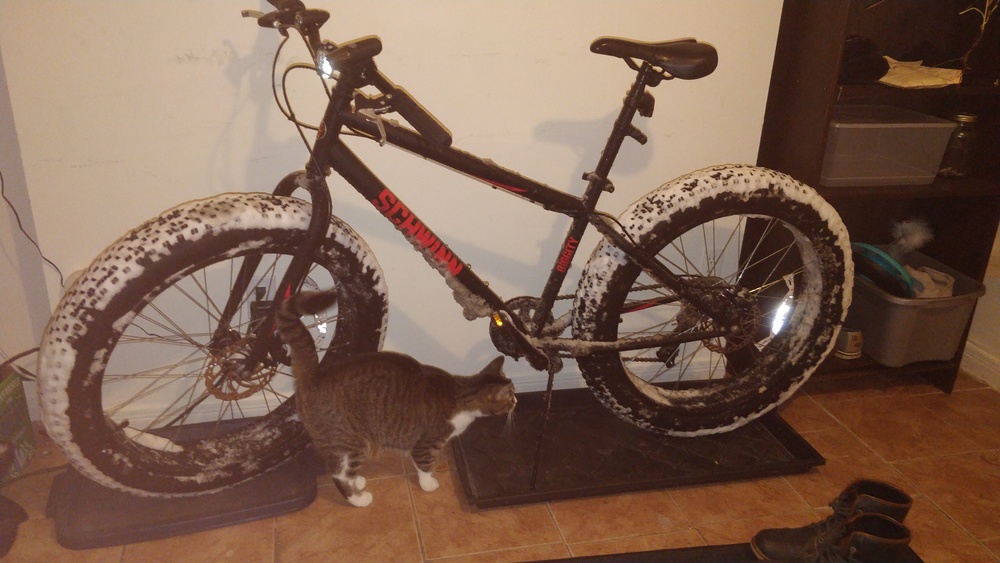 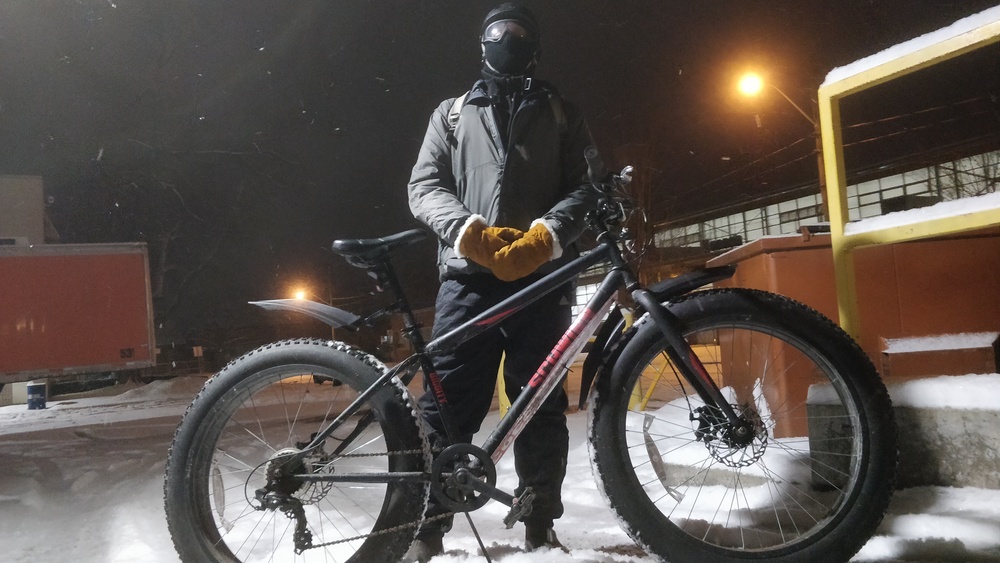 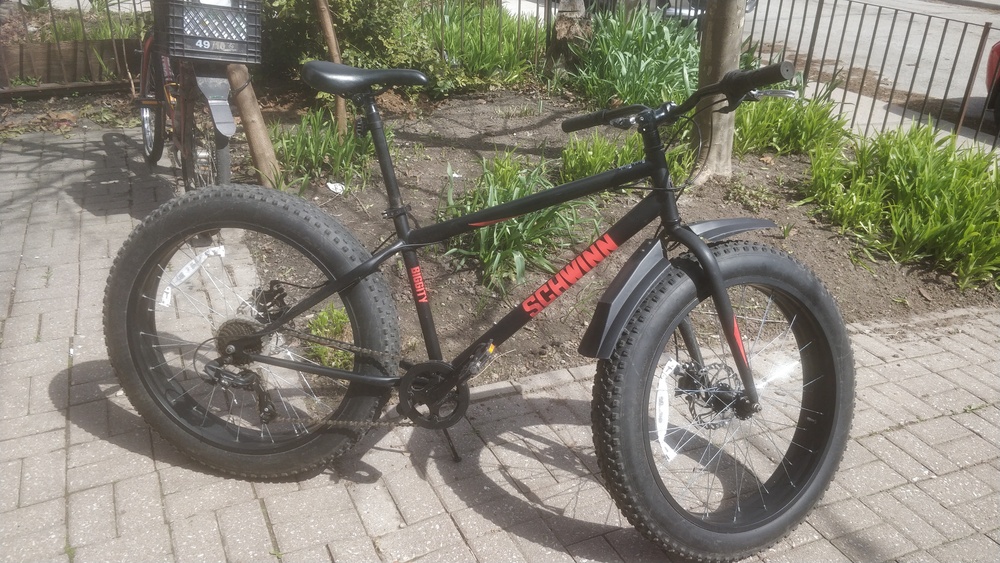 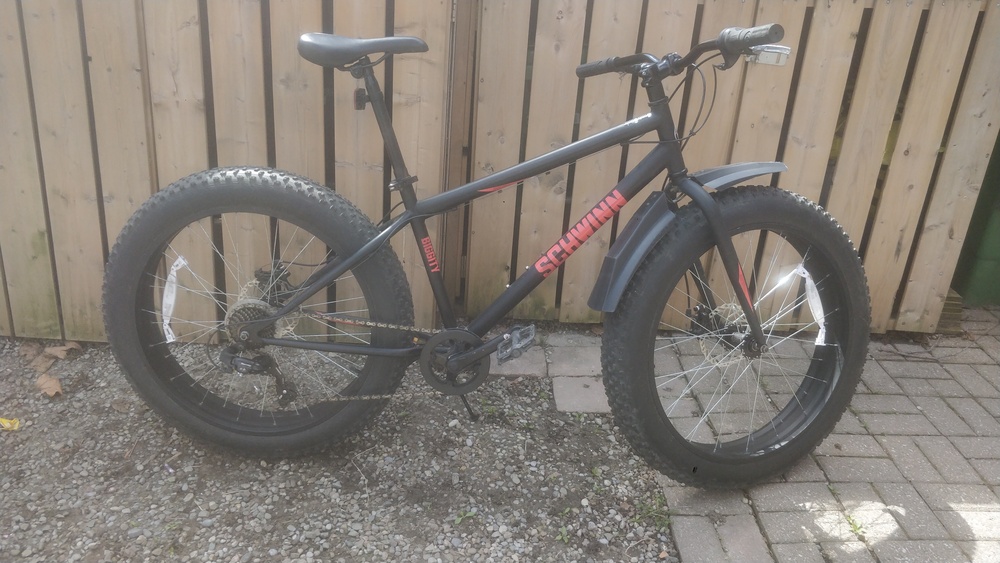 This bike was acquired at a church garage sale by my parents. My dad knows that I love bikes and picked it up for my. The first picture is how it looked when I first got it. It was in fairly decent condition, with some minor problems. The rear derailleur was broken, and needed to be replaced. It also needed new tires. The seat was also too short for me.

I started off by replacing the rear deraileur and getting some new tires on it. I rode it bunch just like that, but really wanted the seat much higher. I got a new seat post from rideaway bikes in Toronto which made a huge difference. The bolt for the seat post also was stripped and I replaced that with a quick release bolt. I also picked up some fenders from cycle solution in Toronto. These two upgrades really transformed the bike into the ultimate city machine. I rode this bike to work for quite some time, however I now ride the Union 3-speed as it had much better cargo carrying capacity.

I was planning on replacing the drop bars with some flat bars and adding a basket on the front, however I never got around to it. It would have been a lot of work and I would need to replace the brake levers as well. When I was riding this bike to work, I wanted a more comfortable riding position and more options for carrying my cargo (I just had everything inside a big backpack on my back). I now have the Union 3-Speed which has all those things, so I no longer feel like this bike needs any further modifications. 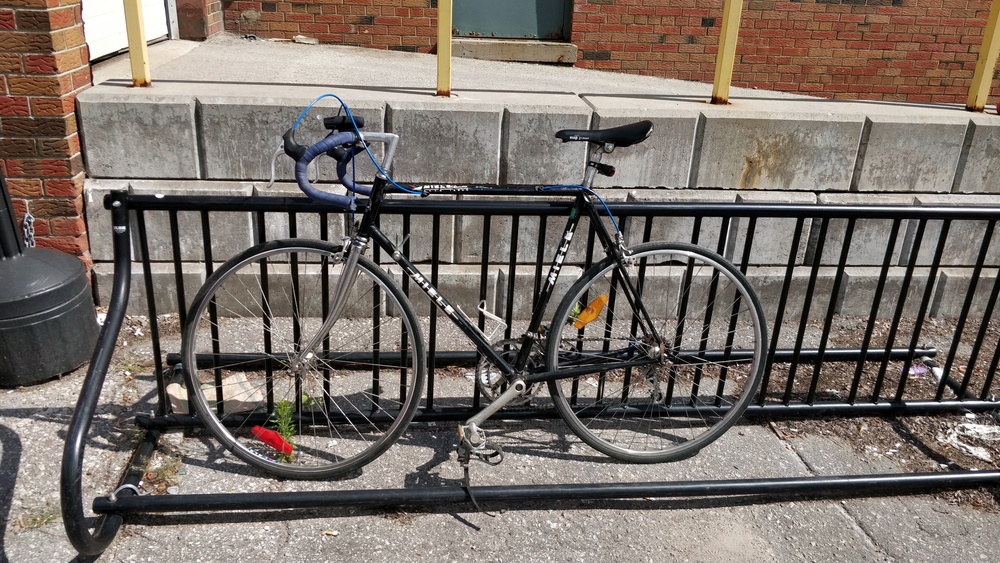